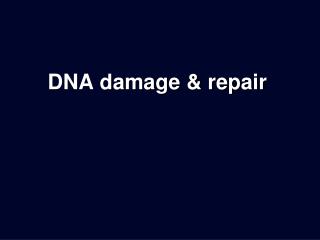 DNA damage & repair. DNA damage and repair and their role in carcinogenesis. A DNA sequence can be changed by copying errors introduced by DNA polymerase during replication and by environmental agents such as chemical mutagens or radiation iPhone Repair in Mississauga| iPhone Screen Repair - For iphone screen repair, we do use highest quality parts when it

DNA Damage and Repair - . why do we care? genetic diseases cancer. cellular responses to dna damage. reversal of dna

THE SPIRIT OF AGING: A NEW BEGINNING - Michael t. railey, md theories of aging the process of growing older including

Chapter 9 The Mutability and Repair of DNA - . outline:. 1.replication errors and their repair 2. dna damage 3.repair of