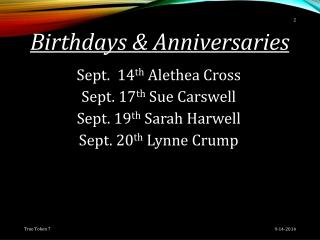 Happy Birthday Wishes - Friends and family are the best gift of life and thus there birthdays are meant to be special.

Memory - . taking in and storing information. what do we remember?. phone numbers social security number lyrics

Memory - . taking in and storing information. what do we remember?. phone numbers social security number lyrics

Introduction - Lessons learned from longscan: findings from a 20-yr prospective study of maltreatment antecedents and

Celebrate the 60 th Birthdays of Professors Takashi Nakamura and - Kei-ichi maeda. from rong-gen cai. connection between

Send Birthday Flowers by Month - . birthdays are always special for everyone. what makes it more special is sending

Kindergarten Sabbath School November 9, 2013 - . by julie alvarez. click to start program. being kind to others makes us

Wireless Synchronization of Mobile Devices - . by eugene kovshilovsky. motivation. need for multiple people to have the

Invitations - . place cards and seating arrangements. when do we use invitations?. christmas party weddings wedding