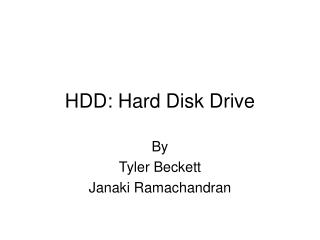 HDD: Hard Disk Drive By Tyler Beckett Janaki Ramachandran Why Are We Here?

Organize &amp; Safeguard Your Hard Drive - By alberta rouse your hard drive the hard disk/drive of your computer is

Understanding and Installing Hard Drives - 2. a guide to managing and maintaining your pc, fifth edition. you will learn.

Is an HDD Regenerator Important? - Need help in fixing and repairing your hard disk drive? look no further! hdd

The Hard Drive - . by “the back table”. definition. hard drive - a non-volatile storage (computer memory that can

Disk Drives - . hard drive. in our original view of a computer as being comprised of alu, control, memory, input and