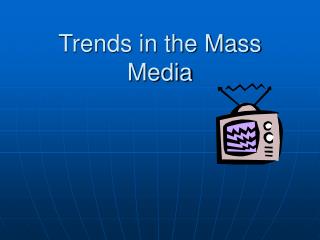 Trends in the Mass Media

Trends in the Mass Media. Quiz. Which is better: Abercrombie & Fitch/Banana Republic/American Eagle/Other? Why? Name a favorite Real World star. Who is Paris Hilton? Which breast did Janet Jackson expose?. Quiz. Who is the U.S. Secretary of Defense? Donald Rumsfeld

Trends in the Mass Media

How Do You Compare to Serious Business Bloggers? - Research from orbit media studios reveals top blogging trends from

The Media - . learning objectives:. by the end of the unit you should have a knowledge and understanding of: - what

The Big Business of Media: The Growth of Media Monopolies By Alan DeSantis - . conglomerations, buyouts, &amp;