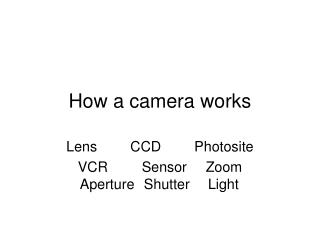 How a camera works Lens CCD Photosite VCR Sensor Zoom Aperture Shutter Light The Basics A camera section, consisting of a CCD, lens and motors to handle the zoom, focus and aperture A VCR section, in which a typical TV VCR is shrunk down to fit in a much smaller space.

How A Camera Works - . image sensor shutter mirror lens. how a camera works. in both film and digital cameras, the image

How A Camera Works - What is a camera?. a camera is a device for forming and recording images that takes stages of

How People Counting Camera Device Works? - Every day we witness the new innovations wonders of technology in every field

How a toaster works! - . by maia!. introduction!. a toaster is a piece of kitchen equipment that everyone can use. you

How a Computer Works - . business communication/presentation. why study computers?. all jobs intersect with a computer in

How A Blockchain Works

HOW A CANDLE WORKS

How a computer works

How a Trebuchet works - . mfet 3320 machine design geoff hale. introduction. a trebuchet is a medieval siege engine, a

How a Generator Works - . allura lothary 5/6 th hour ms.lc. what they do. convert mechanical energy into electrical

How a Computer Works - . the elements of a pc (personal computer). the central unit is a box that contains the elements

How a methodology works? - . as we talked earlier, the methodology can divide the entire implementation into smaller and

How a Volcano Works - . whenever there is a major volcanic eruption in the world, you'll­ see a slew of newspaper

How a computer works? - . by alisha and alexia. colossus

How a Guitar Works - By mr. lewis who invented the guitar? this question is hard to answer. nevertheless . . . the