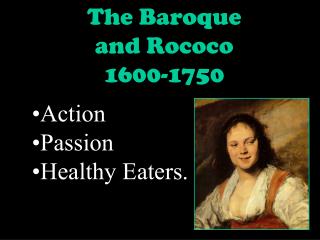 The Baroque and Rococo 1600-1750. Action Passion Healthy Eaters. Counter Reformation was over- Catholic Church was strong again-Protestantism was on the defensive Baroque artists were far removed from science and technology unlike during the Renaissance (too complicated)

The Baroque and Rococo 1600-1750 - . action passion healthy eaters . counter reformation was over- catholic church was

The Baroque 1600-1750 - Comparison of renaissance and baroque styles a simplification of musical style: polyphonic to

Baroque Art: 1600- 1750 - . baroque art succeeded in marrying the advanced techniques and grand scale of the high

Baroque Period 1600-1750 - . a time for powdered wigs, make-up, fancy clothes and furniture. doctrine of affections. a

The Baroque Era 1600-1750 - . dramatically different, within historical context counter-reformation: art should speak to

Baroque Music (1600-1750) - . monteverdi, lully, purcell and the origin of opera vivaldi and the concerto grosso ( the