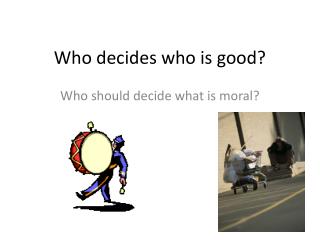 Who decides who is good?. Who should decide what is moral?. Who decides what is good?. Gina Allen Percy Bissche Shelley The Necessity of Atheism Presbyterian Trustee I don’t believe what the church teaches, but Without the church there would be no morality.

Slutsky Equation - . slutsky’s identity. let be consumer’s demand for good i when price of good i is p i and income

On Good Soil: Pastoral Planning for Evangelization and Catechesis with Adults - . [some] seed fell on good soil. it came

SUPERVISION - . meaning. supervision means to supervise or to oversee . it implies; to insure maximum utilisation of

Career Opportunities in Horticulture - . november 29 &amp; 30. why is it good to know this?. 2 reasons: good to know