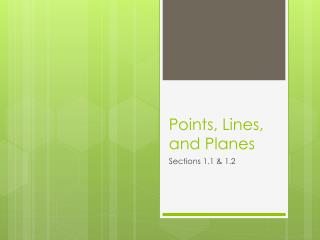 Points, Lines, and Planes. Sections 1.1 & 1.2. Definition of a Point A point has no dimension. It is represented by a dot. A point is symbolized using an upper-case letter. Definition: Line A line has one dimension. (infinite length) Without lifting the pen/pencil off the paper, draw a line through all nine points using only four straight lines - . . .

GENERAL INTRODUCTION OF POINTS - . 3.1 definition of points. points (acupoints) are the places through which qi of

Definition of Geometry - . the branch of mathematics concerned with properties of and relations between points, lines,