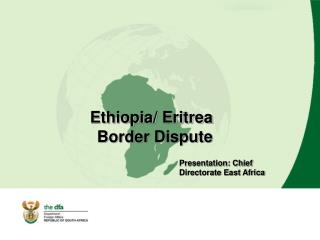 Ethiopia/ Eritrea Border Dispute. Presentation: Chief Directorate East Africa. Background to the border dispute. In 1998 war commenced between Ethiopia and Eritrea over the border, the town of Badme was a contentious issue. More than 80 000 people died during the 3 year war. A train towards a new life - After walking across the border from greece into macedonia, migrants pile onto an

Training the Next Generation of Border Patrol Agents - President trump has pledged to add 5,000 agents to the existing

The Utilization of the Nile Waters: A Shift from Position to Interests - . seifeldin h. abdalla ( ph.d.) (water resources