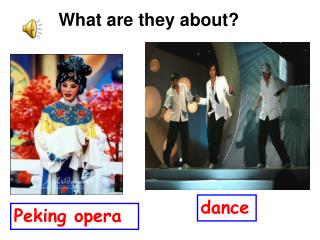 What are they about?. dance. Peking opera. sculpture. architecture. paper cutting. seal cutting. Unit 1. Art. calligraphy. embroidery. WHAT IS ART?. Dance and Dance - . by jonathan dominguez. you can dance in a rug with your socks on. opps i meant to do that. here is a

Dance Dance Revolution - . “the latest weapon in the nations battle with the epidemic of childhood obesity” - ny

Dance - . part of the arts &amp; humanities core content. altered for use with 5 th grade students at perryville

DANCE - . refers to movement of the body, usually rhythmic and to music it is dependent on social, cultural, aesthetic

DANCE - . dance. dance is the most universal human activity found in every culture focuses on the human form in time and

Dance - . betka Ďurčová. what is dance ? . dance is an art form that generally refers to movement of the body, usually

Dance - If you are looking for the dance schools near your area then make a single click at visit:

Dance - . morgan livingston. what is dance?. webster: to move or seem to move up and down or about in a quick or lively

DANCE - Two new techniques for determining j p ’s of neutron resonances, and the search for non-statistical effects in

Dance - . by pinky. dance. dancing is a wonderful sport because it fills you with joy and happiness. to become a real