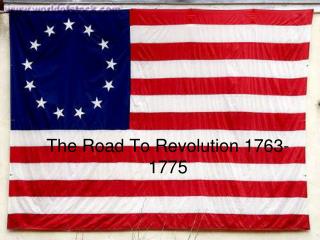 The Road To Revolution 1763-1775. Quick definitions ( mercantilism ) · noun :   an economic system (Europe in 18th C) to increase a nation's wealth by government regulation of all of the nation's commercial interests. Chapter Themes

The Road to Revolution - . 1763 – 1775 mr. love. the deep roots of revolution. insurrection of thought usually precedes

Road to Revolution 1763-1776 - . british action: the british knew the indians would attack again, so king george the iii

Unit 3 Revolution in Georgia Chapter 5 From Royalty to Independence - . events along the road to war . navigation acts

Road to the Revolution - . by wesley sorenson. proclamation of

There was a ROAD to REVOLUTION - . proclamation of 1763. raising taxes. the french and indian war had caused the british

The Road to Revolution - . declaring independence. second continental congress. met in philadelphia beginning in may 1775