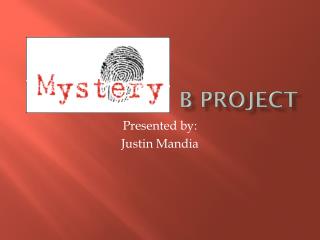 B Project. Presented by: Justin Mandia. Books:. Deathwatch by Robb White The Interrogation of Gabriel James by Charlie Price Vanished by Sheela Chari Cash & Carry by Tim Broderick Thirteen Reasons Why by Jay Asher The Adventures of Sherlock Holmes by Arthur Conan Doyle. Math B Project - . surface area and volume of 3d prisms with nets by kyle garcia. there are a lot of things to do to find

Theme B Project! - . by: destiny thomas. george w. bush . the 43 rd president of the united states. his father was a

Vikasana B ridge Project - . focus. the project is aimed at addressing the child labor problem in india. continuing

Production B: Penelope Project - Production a: memories for life. production b: penelope project. 2014.

The Hep b Project - Realizing a vision:. the hep b project. our mission. educate, screen, vaccinate asian population of

Facebook Project – B Farmer - . you can complete one or more of the following pages on a historical figure. insert the

Census Project Student Pair B - . how many years has your family lived in new