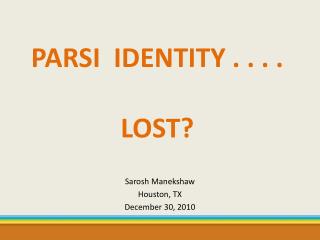 PARSI IDENTITY . . . . LOST?. Sarosh Manekshaw Houston, TX December 30, 2010. OBJECTIVE. To trace the development of and changes to Parsi Identity over time To present some major events that impacted Parsi Identity, and to describe how they changed our Identity I AM PROUD TO BE A PARSI - . parsi is synonymous with ancient persia.parsis have added sweetness to the indian

Lost Technology - . 2014131021 takamitsu sakai. what is lost technology ？. it is the technology that has been lost by

ALMOST LOST - . “now ‘if the righteous one is scarcely saved, where will the ungodly and the sinner appear ?’” (1

What is lost/gained as cultural identity evolves? - . finding the cross-cultural unifying factors. .

What is lost/gained as cultural identity evolves? - . finding the cross-cultural unifying factors. . free

LOST - . take note of the next scenarios…. difficulties with word retrieval needing time to summon an oral response

LOST - . in the genome… f ind where you at, fool!. nirav malani rick bushman lab department of microbiology university

LOST - . play if you dare. instructions for killing the animals . instructions. when you are in a fight click anywhere