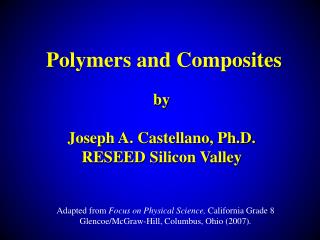 Chapter 29 Synthetic Polymers - . 29.1 some background. natural and synthetic polymers. a polymer is a substance composed

Polymers - . polymers are giant molecules that are made up of many, many smaller molecules. building blocks for polymers

Biological Polymers - . what are they?. definition. biological polymers are large molecules formed by many monomers

Using Polymers - . lesson objectives. by the end of the lesson you will be able to: recall some common polymers and their

Polymer Modified Bitumen - . oscar ellison. contents of presentation . why do we use polymers what are polymers history

Day 25: Intro to Polymers - . our approach to this very important class of materials is as follows: basic vocabulary and

Composites - . what is a composite material?. a broad definition of composite is: two or more chemically distinct