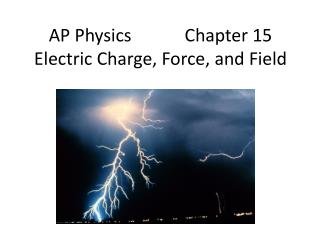 Coulomb law - . electric fields of force. the force of electric charges are determined by the type of charge of the

Electric Field - . physics mrs. coyle. analogy. the electric field is the space around an electrical charge just like a

Chapter 15 - . magnetic circuits and transformers. forces and laws of physics. lorentz force the force on a moving charge