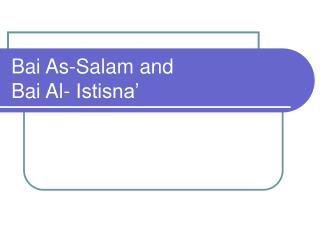 Bai As-Salam and Bai Al- Istisna’. Definition. Bai As-salam or Salam or Salaf means a contract in which advance cash payment is made for goods to be delivered later on. ISLAM The True Message Of Moses, Jesus and Muhammad (Peace Be Upon Them) - . nabil abdus-salam haroun. contents. chapter