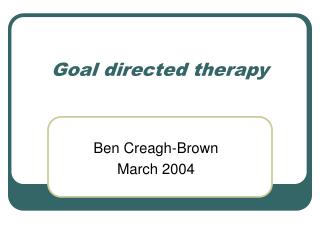 Goal-Directed Design - . an effective ui design process. quick overview/recap. persona hypothesis. who might use this

Goal-Directed Design - . chapter – 1 cooper. user needs. if we design and construct products in such a way that the

Goal Directed Patient Assessment - . dan batsie dbatsie@apems.org. how is an emt different than a taxi driver?. goals of