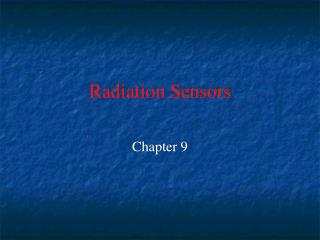 Radiation Sensors. Chapter 9. Introduction. We have discussed radiation in Chapter 4 when talking about light sensors. Our particular concern there was the general range occupied by the infrared, visible and ultraviolet radiation.

CHAPTER 23 Mass Air Flow Sensors - . objectives. after studying chapter 23, the reader will be able to: prepare for ase

Sensors and Wireless Sensor Networks - . roadmap. motivation for a network of wireless sensor nodes definitions and