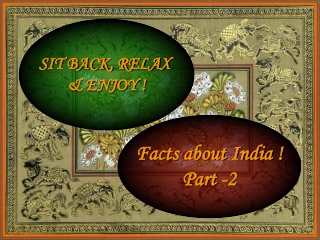 SIT BACK, RELAX & ENJOY !. Facts about India ! Part -2. India's Civilized Past. Please click to advance >. India never invaded any country in her last 10,000 years of history. India. It is the only society in the world which has never known slavery. Let’s sit back and take a ride back in time. See and hear where the music we love came from. Enjoy!! - Music of the

RELAX NG - 2. caveat. i did not have a relax ng validator when i wrote these slides. therefore, if an example appears to

Frangipani Island - . by eden. about the island!. frangipani island is a beautiful relaxing island where tourist come and

For Monday September 30 th : - . “a journey back in time” – sit back and relax as you are transported back to where

Field Trip!!!!!! - . today we are going to visit the capitol of virginia…. so, find a buddy, and a comfortable seat.

Enjoy the Views Green Lake 2014 - . welcome! sit back and enjoy the views of green lake. check in at kraft centre. enjoy

HOW TO RELAX FOR DUMMIES SATS VERSION - . top ten tips. hold something that will calm you down e.g. yoga stone. sit in a

SIT BACK, RELAX &amp; ENJOY - . the simple, yet remarkable achievements. of these pioneers in african american

It, Not Just Food – It’s Paella Party - Paella is a festive dish that everyone loves. it’s the ultimate interactive