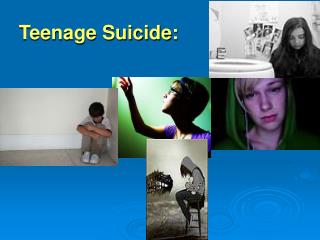 Teenage Suicide:. SUICIDE. Intentional Self-Inflicted Death. Just the Facts. Every 13.7 minutes another life is lost to suicide, taking the lives of more than 38,364 Americans every year. Every day 105.8 Americans take their own life Suicide is now the 10th leading cause of Mourning in Bagram - Fellow troops mourn for six u.s. service members killed by a suicide bomber near bagram air base in

Chicken Soup for the Teenage Soul - . stories of life, love, and learning. created and compiled by sally c. shoemaker.

ADOLESCENT DEPRESSION - . types of depression. 1. dysthymia is chronic ongoing mild depression and occurs when a child