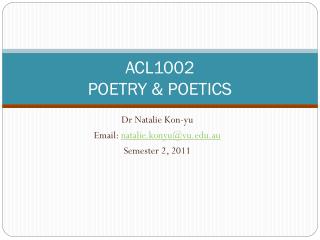 ACL1002 POETRY & POETICS. Dr Natalie Kon-yu Email: natalie.konyu@vu.edu.au Semester 2, 2011. Appreciating poetic form — identifying poetic formality. Do the form and the formal elements of a poem affect our understanding of it? poetics in a nutshell - About aristotle. by tamiane thompson. his early years. aristotle was born in stagria, on the

Aristotle’s Poetics - . plato loved poetry but felt that because of socrates teachings, that poets were imitators

THE POETICS AND POLITICS OF REPRESENTATION - . the “crisis of representation”. critical theory &amp; crisis of

Poetry, Novel, Drama, and Genre in the Perspective of Comparative Poetics - . part 1 comparison between chinese and

ACL1002 LECTURE ONE What is Poetry? - . dr rose lucas. what is poetry?. a particular and concentrated form of linguistic

Rhetoric, Poetics and Neuroscience: - . what can the humanities mean for science?. michael burke. research question. the

Shakespeare’s Poetics - . week 2 // winter 2014. analyzing shakespeare. so far we have performed one or two readings

Aristotle’s Poetics (384-322 B.C.E.) - . background. aristotle was the pupil of plato (who studied under socrates)and