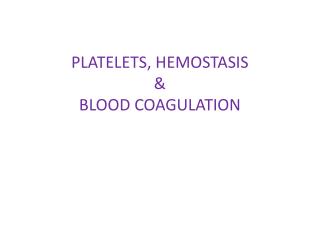 PLATELETS, HEMOSTASIS & BLOOD COAGULATION. Learning objectives. To understand the role of platelets in hemostasis To describe the steps of hemostasis To know the pathways of coagulation or clotting To be familiar with some abnormal clotting conditions. PLATELETS. Hemopoiesis.

Blood Clotting - . the coagulation process. what is blood?. blood is a fluid that carries nutrients, gases, and wastes

Does blood transfusion alter the balance between hemostasis and thrombosis? - . neil blumberg md university of rochester,

Blood Coagulation - . dr mahvash khan mbbs, mphil. hemostasis. the third mechanism by which hemostasis can be achieved is

Platelets - Hemostasis. definition:prevention of blood loss.. events involved in hemostasis . . whenever a vessel is