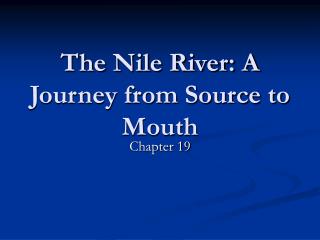 The Nile River: A Journey from Source to Mouth. Chapter 19. I. Geoterms. A. Hydroelectric potential : the electrical power that can be generated from flowing water B. Perennial irrigation : a system that allows for the year-round watering of crops The mighty Yellow River - The torrential flow of china's yellow river is a source of fish, floods and

River landscapes and processes - . geography ccea gcse 2009. the earth’s crust is modified by fluvial processes which

Aswan High Dam Was it worth it? - . a case study of water storage and transfer in egypt (an l.e.d.c.) acknowledgement to

DIAGNOSIS AND MANAGEMENT OF XEROSTOMIA IN THE ELDERLY PATIENT - . salivary gland dysfunction and xerostomia (dry mouth).

Uganda - . 2003. fishermen on lake victoria. moira at the source of the nile, discovered by sir john speke. xwalukunyu:

If You See : Neolithic Revolution - . think of : end of the last “ice age” people began to settle = civilizations

The Geography of Africa - . a satellite view. the mighty nile river: “longest river in the world”. the sahara desert.

If You See : Neolithic Revolution - . think of : end of the last “ice age” people began to settle = civilizations

The River I s B ig - . by connie ah see . the river is big, cold and wide. it twists and turns across my country. we

Classification of English vowels - . vowel sounds are classified according to: the position of the tongue in the mouth,

Catch That Trout! - . fishing new zealand. its not always easy. nor are the fish!. but you win the odd one. decision