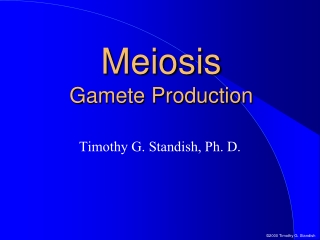 Meiosis - . each organism must inherit a single copy of every gene from each of its “parents.” gametes are formed by

Meiosis - . sexual division of cells. gamete vs. zygote. what is a gamete? egg &amp; sperm . what is a zygote? when

Chapter 7 - . conception and development of the embryo and fetus . basic concepts of inheritance. human genome project

Formation of Female Gamete - . embryo sac development. cells of carpel sac are 2n. cell in ovule divide by meiosis and it

MEIOSIS - . meiosis. the form of cell division by which gametes , with half the number of chromosomes, are produced.

Lecture #5 Meiosis and Gamete Formation - . unit: cellular reproduction. the birds &amp; the bees. humans and most

Meiosis - . gamete production, takes place in reproductive organs/parts in both plants and animals gametes have half the