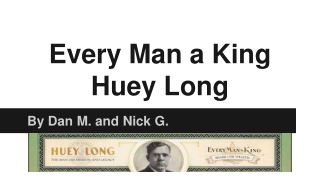 Every Man a King Huey Long. By Dan M . and Nick G. Early Career. Huey Long began his career as a traveling salesman, practicing his mastery of the english language claiming “I can sell anything to anyone” Huey Long - . fdr was not doing enough for the poor . long pushed his “ share our wealth ” program. take all income

Why Every Man Should Own A Brief Underwear - All things considered, they did, yet the last is viewed as the regular plan

Why Every Man Should Wear A Silver Bracelet - Jewelry has forever been associated with women. in our world, only women

The King and the Poor Man - . kamishibai presentation by

Henry VIII – The Man, the King - . l.o: to explain the changes that took place during henry viii’s reign . catherine

Once to Every Man and Nation - . words by james russell lowell, alt. music by john zundel words and music public domain.

5 Nutrition Supplements Every Man Needs - In our fast-paced life, we seldom find the time to have proper foods. we both

1920s and 30s The Great Depression - . review. this was the name given to the period of fear of communism in the u.s.