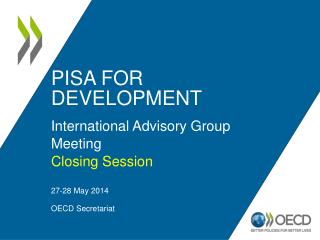 PISA for Development Technical issues to be addressed (for ToRs) - . contextual questionnaires and data collection

Best Practice Meeting for Youth Development - . presentation by chapter 2 deirdre mayo. question??. do too many cooks

Essential component of NAS are the MILESTONES Basis is to track development in the 6 competencies - Milestones. essential

PISA 2012 - . what is pisa?. i nternational large-scale assessment organized by the organization for economic cooperation

PISA 2012 - . summary of results. about pisa. the programme for international student assessment (pisa) is an