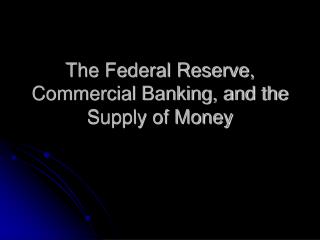 ISLAMIC BANKING - . a new avenue to business. defination. islamic banking refers to a system of banking activity that is

Introduction to Banking - . introduction. a bank is a financial institution whose primary activity is to act as a payment

The Money Market and Interest Rate - We studied how the fed changes the money supply. through open market operations