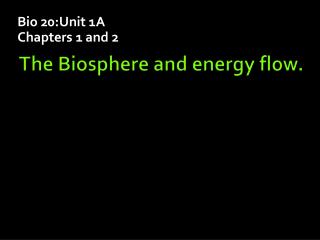 Energy Flow in the Cell - . what is energy?. capacity to do work. 1. kinetic energy - energy of movement (e.g. light,

2.1 Energy Flow in Ecosystems - . biomass is the total mass of all living things in a given area. (measured in g/m 2 or

Energy Flow Section 3-2 - . objectives: trace the flow of energy as it decreases through the trophic levels from

Energy Flow Through Cells - . energy . what are some of the reasons that cells require energy?. energy. from where do

Biology 20 - . equilibrium in the biosphere. ecology. explain the one-way flow of energy through the biosphere and how

Unit A: Energy and Matter Exchange in the Biosphere - . section 1.1 equilibrium in the biosphere. earth is a closed

The Hydrosphere and Biosphere - . life on earth is restricted to a very narrow layer around the earth’s surface. this

Flow of Energy - . source of energy. sun = sol. raise your hand if you included this on your schoolyard diagram. the sun

Energy Flow in Ecosystems - . what happened here? while you were hiking, some hungry animals turned your campsite upside

Energy Flow - . energy. energy is the ability to do work and transfer heat. kinetic energy – energy in motion heat,

3-2 Energy Flow - . objectives. identify the source of energy for life processes. trace the flow of energy through living

Chapter 15 Energy Flow - 04 organisms obtain energy in a variety of ways 04.1 explain the importance of photosynthesis in

Ecosystems and the Biosphere - . energy flow through an ecosystem linear sun to producer to consumer to decomposer