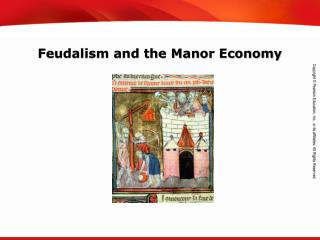 Feudalism and the Manor Economy Feudalism and the Manor Economy. Objectives. Explain how feudalism shaped medieval society. Describe the lives of knights and nobles. Analyze how the economic system of the manor worked and how it affected peasants and nobles. Terms and People.

Feudalism and the Manor Economy

Feudalism and Manorialism - . what’s the difference between feudalism and manorialism? what was life like on the manor?

Feudalism - Definition: the economic and political system that developed in europe during the middle ages. feudalism.

Feudalism - . the social structure of the middle ages was organized round the system of

What is Feudalism? - . review of last day. william the conqueror vs. harold godwinson at the battle of hastings.

Aim: What was daily life like under feudalism? - . do now: if you had lived during the middle ages, would you have

Feudalism: Obligations, Defense, and the hard day’s knight of a peasant - . castle time!. feudalism. because of viking,

Feudalism - . gps standards . sswh7 the student will analyze european medieval society with regard to culture, politics,

Knight Knotes - . manor workers role of a knight code of chivalry stages of knighthood heraldry. workers on the manor. a

Feudalism - . chapter 9. 2. feudalism. the vikings and other invaders posed a large threat to the safety of people

Section 2: Feudalism in Europe - Feudalism, a political and economic system based on land-holding and protective

Feudalism/Chivalry - . a tale of kings, knights, manors, and fights. feudalism. the feudal system was based on rights and

Feudalism and the Manorial System - . feudalism. europe after the fall of the roman empire turned to a system of small