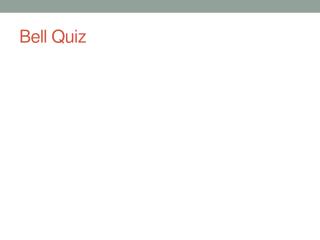 Bell Quiz. civilizations. What is a civilization? . A complex culture with 5 unique characteristics Advanced Cities Specialized Workers Complex Institutions Record Keeping Advanced Technology Was Ur in Sumer a Civilization? What evidence shows is there for or against?. Bell Quiz - . the nfl is currently considering making a rule that would ban the use of the “n-word” by anyone on the

Bell Quiz - . take a stance: “ violence breeds violence.” agree or disagree? why or why not? provide examples.

Bell Quiz - . answer the following questions in complete sentences: 1. why did vladek take artie’s coat? 2. who is

Bell Quiz - . 9.1 adding and subtracting polynomials. you will review what polynomials are you will learn how to add and

Bell Quiz - . 1) read page 617 of the textbook “loyalty review board” and “the house un-american activities

Bell Quiz - . list the 3 major parts of the social security act (page 501). what percentage of u.s. farms and homes had

Bell Quiz - . list the 3 major parts of the social security act (page 501). what percentage of u.s. farms and homes had

Bell Quiz - . determine the values for which the rational expression is undefined. 1.). 2.). factor and simplify each r

Bell Ringer Quiz - . a gas bubble is squeezed with 7.42 atm of pressure. the bubble started at a size of 2.7 l under stp

Bell Ringer/Quiz - . cycle 3. a day bell ringer cycle 3 3094. how are accurate and precise measurements affected by a