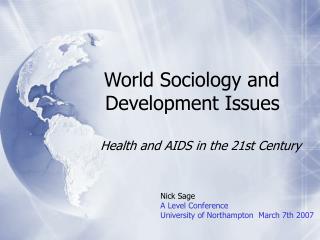 World Sociology and Development Issues. Health and AIDS in the 21st Century. Nick Sage A Level Conference University of Northampton March 7th 2007. What is globalization?. Development Issues within the world - . trade vs. aid. questions you should be able to answer at the end of this

Development issues within the world - . ‘trade versus aid ’ ‘economic sustainability versus environmental

Sociology: Understanding and Changing the Social World - . chapter 1 sociology and the sociological perspective .

The development of Sociology - . fields of study in sociology. wide range of topics studied in sociology, including:

The Development of sociology - . where did it come from?. developed as a field of study  1800s several factors led to

Chapter 1: Sociology and the Real World - . what is sociology?. sociology is one of the social sciences —disciplines