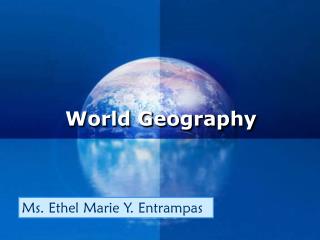 World Geography - . population and culture. what are things that humans do to arable land that make it more vulnerable to

World Geography - . what is “geography”? take a few moments to record what you think this course will entail. which

World Geography - . themes, fact, and the basics!. location : most geographic study begins with learning the location

World Geography - . vocabulary review. the process of spreading new knowledge and skills from one culture to another.

World geography - . chapter 1 globalization and world regions. different and similar world. if you compared places, you