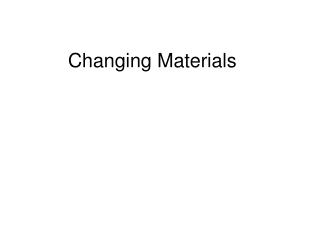 Sustainable Building Materials Changing the Way we Build. - At https://www.oclonline.co.uk, you can learn more about our

Changing rules, changing roles - . being a cataloguer in 2012. these views are all my own and only my own. change is the

Changing Populations, Changing Methods - . for the teachers of limited english proficient students in the