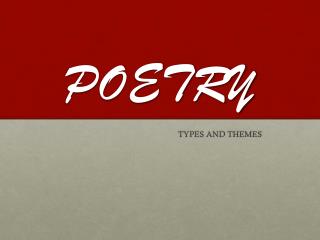 POETRY. TYPES AND THEMES. WHAT IS POETRY?. Take out a piece of paper and write 15 things poetry is, does, describes, etc… Ex. Poetry is an art form in which humans use words to describes feelings. Turn in when done. 1 st Major Assignment. Find a Poem and MEMORIZE IT!!