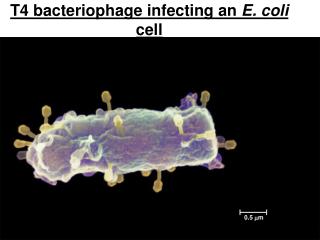 0.5 m. T4 bacteriophage infecting an E. coli cell. Science as a Process. Research into TMV led to the conclusion that the pathogen was smaller than a bacterial cell The pathogen was named virus. Virus. Bacterium. Animal cell. Animal cell nucleus. 0.25 m. Lake Michigan - What is e. coli. e. coli is a large group of bacteria. usually it is harmless but it can make you

Escherichia coli - . e.coli is a normal inhabitant of the intestines of all animals, including humans. when aerobic

Cell Cycle and Cell Division - . prokaryotic cells - bacteria. e. coli is a bacteria that resides in our colon and can be