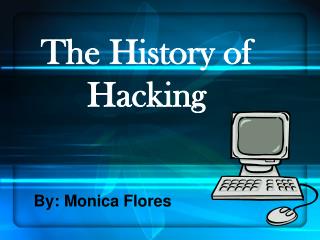 The History of Hacking. By: Monica Flores. What is hacking?. Hacking is the intentional unauthorized access to computer systems Illegal activities from harmless pranks to huge thefts and shutdowns of services Three phases of hacking: Phase 1: the 1960’s and 1970’s The Hacker Files: Deep Within the History of Hacking - . by sean owens. hacking 101. hacking has been around pretty much

Hacking the Library - . tools, tips, and tricks to find, organize, and keep up to date on current research in your field.

Hacking the Mind - . manipulating the mind into doing what you want - jason principe, cht. who am i?. who am i?.

The Ethics of Hacking: The Worm of 1988 - . thanks in advance to: thefuturesite.com time.com world.std.com/~franl

Hacking - . alexander neeley group 2. phase 1: the joy of programming. hacking a more tasteful myspace only shows you how

HACKING - . introduction. the process of attempting to gain or successfully gaining,unothorized access to computer