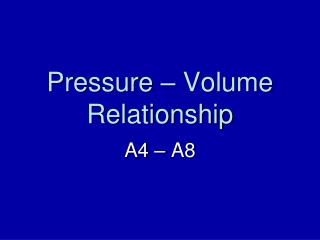 The Mole – Volume Relationship - . avogadro’s hypothesis. equal volumes of gases at the same temperature and pressure

Aim : What is the relationship between pressure and volume of a confined gas? - . essential questions : why are gases

Pressure-Volume Equations of State - . * motivation : describing the compression of materials on a quantitative level,

Determine the relationship between pressure and volume - Finding a relationship p vs v by marianne deverell, mike

Concentration of Solutions and the Concentration/Volume Relationship - . prepared by michigan department of environmental

High volume low pressure spray equipment - . hlvp spraying systems are light, mobile and easy to clean, and they can

Volume/Pressure and High Frequency Ventilators - Without reference, identify principles about volume/pressure and high

The Temperature-Pressure Relationship Gay-Lussac’s Law - . the pressure of a gas is directly proportional to the

Ch. 10.2 Mole-Mass and Mole-Volume Relationship - . the mole-mass relationship. molar mass of any substance is the mass

Ventricular Pressure-Volume Loops - . steve wood, phd scwood@salud.unm.edu. i i. the ventricle as a pump: cardiac output