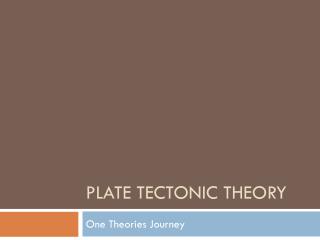 Introduction to Plate Tectonic Theory - . introduction. plate tectonics is the theory that earth's outer layer is made up

PLATE TECTONIC QUIZ - . _____1. what is the main idea alfred wegner proposed in the “ theory of continental drift”

Plate Tectonic Test - . a. b. c. use the pictures above to answer questions 1-3. each answer choice will be used once

Plate Tectonic Assignment - Diary. it was the year 1980 when mount. st. helens eruption destroyed my town. it was

Tectonic plate = Lithosphere - . how plate tectonics got figured out. -study of continents (theory of continental

Plate Tectonic Notes - . stress is the amount of force per unit area put on a given object. deformation is the rock

TECTONIC THEORY - . pangea. alfred wegener was a german climatologist and arctic explorer who suggested the concept of

A Plate Tectonic Primer - . adapted from dr lynn fichter james madison university. “ no rock (or mineral) is an

Plate Tectonic Unit Review - . get out a white board &amp; marker and get ready to study!!!. question #1. the