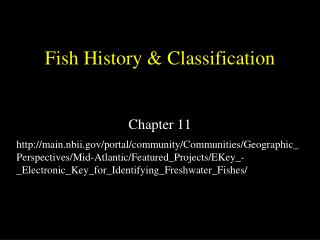 CLASSIFICATION - . classification = the grouping of objects or organisms based on a set of criteria. taxonomy = a branch

The Bait The Equipment The Fish - . finding the fish. matthew 4:19 and he said unto them, follow me, and i will make you

Fish Oil - . the best supplement! by: wytnee riley. what is it?. fish oil can be consumed either by eating fish or taking

Classification History - . classification history. taxonomy : branch of biology that groups all life according to their

Classification of Animals - . click to continue. introduction. audience this projects is intended for third grade

Fish and Seafood Categories – fish and shellfish - . fish. have fins and a bony skeleton with backbone. low in fat,

History of Classification - . classification history. taxonomy : branch of biology that groups all life according to

Classification - . essential question why is it important to place living things into categories?. 18.1 history of