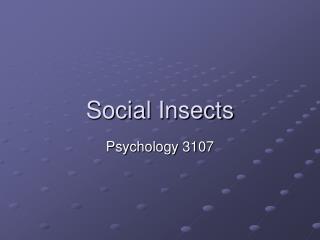 Social Insects. Psychology 3107. Introduction. Many Insects live in hives, nests or what have you Definite roles for different castes, usually only one female that lays eggs Other females are ‘sterile’. An Example. The life history of the Bumblebee Social insects Ch. 11 - . eusocial : co-operate in reproduction and have division of reproductive effort division of

Self-Organization in Social Insects - . kaz uyeharaaaaaaaaaaaaa!!!. the basics. insects are pretty smart, but are they

Insects - Insects insects have 6 legs. no- a spider is not an insect. it has eight legs. click on the spider to go back.

Insects - . victor b uccafuri. a phids. aphids are among the most destructive insect pests on cultivated plants in

Insects - . insects. insects have thrived for more than 300 million years (long before rise and fall of dinosaurs) very

INSECTS - . can you identify the insect? delete the words that don’t fit the picture. which insect is this?. ant bee

Insects - . class insecta. most numerous and diverse of all the groups of arthropods. (there are more species of insects