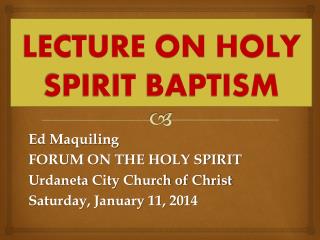 SIGNIFICANCE OF NUMBERS IN HOLY QUR ’ AN-PART 2 - . based on the works of harun yahya www.harunyahay.com and others

Absolution - Then there will be righteous sacrifices, whole burnt offerings to delight you; then bulls will be offered on

Revelation Song - . worthy is the lamb who was slain holy, holy is he sing a new song to him who sits on heaven's mercy

Welcome - . god of wonders. lord of all creation of water, earth, and sky the heavens are your tabernacle glory to the

It arrives quickly, nipping at the heels of the joyous promise of the Christmas season. - Most holy an triune god,

The Gifts of the Spirit - . the nine gifts of the spirit. base on the holy spirit and his gifts by kenneth e. hagin. the

Spirit-Anointed Teaching - . and they were astonished at his doctrine: for he taught them as one that had authority, and

The Holy Spirit - . prepared by chris reeves for the memorial bvd. church of christ fall quarter 2004. why study the holy

GIFTS OF THE HOLY SPIRIT - . alexander, caesar, charlemagne, and myself founded empires; but upon what did we rest the