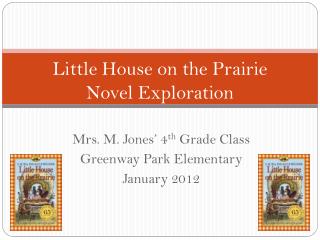 Little House on the Prairie - . by laura ingalls wilder a presentation by alexandra vawser, year 3, 2011 . the author of

Little House on the Prairie Series - . by: coles and mccabe. about the series. favorite books. important characters. mary

THE LITTLE HOUSE - . the little house . was a 2-part drama shown on itv 1 at 9pm on monday nights writer - philippa

The Little White House - . it was originally constructed in 1890. its most important usage was as the winter house of

A Little Prairie in the Big City - . a design plan created by aaron, najah, ethan and kaitlyn december 2007. our design.

Culture Clash on the Prairie - . great plains. a) grassland extending through the west-central portion of the united

Cultures Clash on the Prairie - . what issues occur when different groups try to claim land in the west?. 1. native

Little house is the big woods - . by :emme sparks. main characters. mama- mama is the mom in the book and that is what