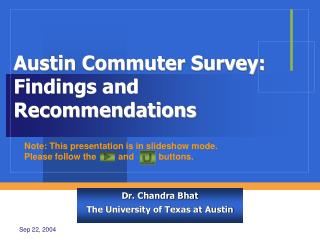 Dr. Chandra Bhat The University of Texas at Austin. Austin Commuter Survey: Findings and Recommendations. Note: This presentation is in slideshow mode. Please follow the and buttons. THE CONTEXT. Millennium Ecosystem Assessment Findings - . overview of findings. over the past 50 years, humans have changed ecosystems

The Causes of Survey Mode Differences and Their Implications for Survey Design - By don a. dillman thomas s. foley

The Surveyors are Here, Now What? Success Strategies for the Survey - . success is an ongoing activity. managing the

QUANTITATIVE SURVEY RESULTS - . for the board for certification in pedorthics march 5 - 6, 1998. quantitative survey