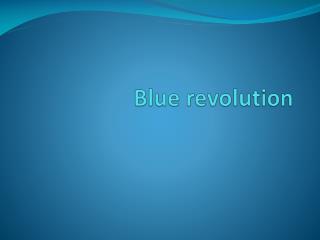 Blue revolution. What is it?. It is the water equivalent of the green revolution and primarily refers to the management of water resources that can steer humanity to achieve drinking water and security in irrigation of crops. Why Blue Revolution?. Blue Revolution - . introduction. since 1950, there has been a 100 percent increase in demand of fish world consumption

BLUE - Red. white. and. blue. picnic. looks like fun!. why did we have the picnic?. well we had the picnic to celebrate

November Revolution [October Revolution] - An american journalist at the storming of the winter palace, st. petersburg,

American Revolution/ French Revolution - . unit 1: essential question #2 how did the principles and philosophies of the