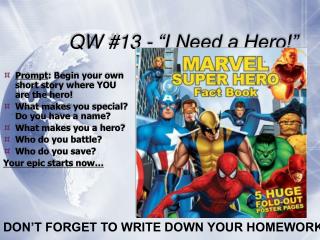 QW #13 - “I Need a Hero!”. Prompt : Begin your own short story where YOU are the hero! What makes you special? Do you have a name? What makes you a hero? Who do you battle? Who do you save? Your epic starts now…. DON’T FORGET TO WRITE DOWN YOUR HOMEWORK!. Let’s review for a quick second…. QW #11 - . how does each individual’s view of “right” and “wrong” determine how the reader views the conflict

QW 1 - . what type of music do you listen to the most? why do you think you are most drawn to that genre? what’s your

QW: Fear - . is fear an effective motivational tool? explain your answer by providing examples. ½ page be ready to share

QW 3 - . using 3 literary devices, describe your favorite meal. remember to be as specific as possible. ( 5-7 sentences

SL QW #1 - . what do you think about the symbol of the rose by the prison door? anything else strike you as we read these

Good Morning QW: - . why do you think people are more likely to do something when lots of other people are doing it too?