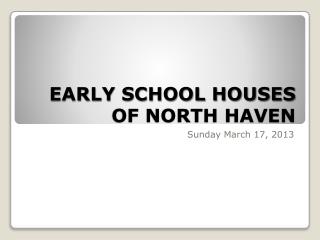 EARLY SCHOOL HOUSES OF NORTH HAVEN. Sunday March 17, 2013. Ezekiel Cheever The Cheever School of New Haven first free school in America . “For the better trayning upp of youth in this towne …it is ordered that a free schoole be sett upp …”. Written in the New Haven Colony Records, 1641. Building Houses in the North - . chris j. building materials. in summer, materials are transported on the barge to north.

The Early People of North Carolina - . september 23, 2013. how did the earliest people get to nc?. migrated-moved across

The Early People of North America - . how did they come to n. america?. it is thought they used the beringia land bridge,

Early Native Americans Of North America - . did you

Early North American Cultures - . first routes to america. turn to page 5 in your text settlements were believed to have