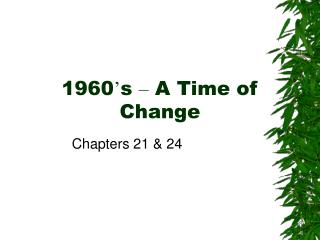 Organisational Change - . chapter 2 the nature of change. introduction. the chapter: discusses a number of frameworks for

Ruby in Her Own Time Big Question: What do we learn as we grow and change? - . author: jonathan emmett illustrator:

Time to Reformat - . church of midland 2005 conference pastor angel de jesus. introduction. we have been hearing the same

The Early Cold War: 1947-1960 - . every nation has a seat five permanent members to the security council us, ussr,

PKA: Answer on your own paper and turn in to Ms. Deel - . 1. do populations of organisms change over time? how do you