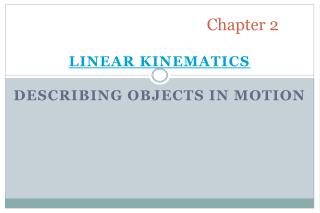 Chapter 2. Linear Kinematics Describing Objects in Motion. Define Motion:. Motion is a change in position over a period of time . . Space and Time. Types of Motion. Linear Motion ( translation ) all points on the body move the same distance in the same direction at the same time