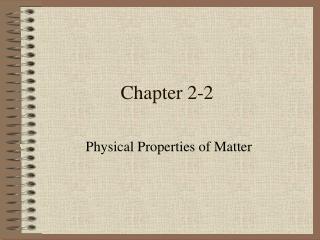 Chapter 2 Lesson 2-2 - . histograms , frequency polygons and ogives. the number of counties, divisions, or parishes for

Chapter 2 Section 2 - . surveys, samples, and populations obj : explain the survey method and the importance of proper

Chapter 2 Section 2 - . minerals. what is a mineral?. what are the components of a mineral? naturally occurring solid

CHAPTER 2 SECTION 2 - . chapter 2, section 2. if a basketball team had fiver players who were considered big starts, what

Chapter 2-2 Equivalence - . today’s objectives: by the end of this lecture students will be able to 1- understand

Class 2 – chapter 2 - . financial fundamentals of accounting (cont.). assets are financial uses. the left-hand side of

Chapter 2 Section 2 - . the constitution of the united states. state constitutions. states had more power than the us