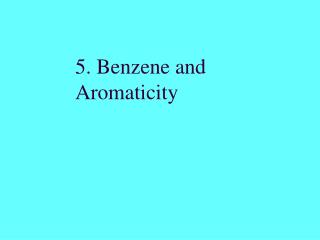 5. Benzene and Aromaticity. Aromatic Compounds. The term “Aromatic” is used to refer to the class of compounds structurally related to Benzene.

Aromaticity - . 6-pi electrons in the cyclic planar system, as one lone electron pair of s is not on the sp 2 orbital but

11.19 Cyclobutadiene and Cyclooctatetraene - . heats of hydrogenation. to give cyclohexane (kj/mol):. heat of

Benzene and and the Concept of Aromaticity - . chapter 21. 21.1 a. benzene - kekulé . discovered by michael faraday in

Chapter 17: Alcohols and Phenols - . alcohols and phenols. alcohols contain an oh group connected to a a saturated c (sp